Uta (ウタ, Uta) is an old friend of Renji Yomo and Itori.

He owns the HySy ArtMask Studio, where he sells bespoke masks. In his teenage years, he was known as No Face to the CCG investigators in the 4th ward.

Uta is man of average height with black hair, styled into an undercut. Various tattoos cover his arms, and a sun tattoo covers his entire left pectoral region. For unexplained reasons, his kakugan always remains visible. Uta typically wears a grey tank top underneath a black wrap sweater, along with harem pants and black sandals. He also wears a black necklace with round, white gems hanging from it. Kaneki describes his appearance as being a little scary.

As a teen, his hair colour was much lighter, swept back, and at times kept down with a hairband. He did not have any of his tattoos during his younger days. His ghoul mask is an expressionless face with a stitching design similar to a voodoo doll, covering the eyes and the white surface.

The tattoo on his neck is a Latin quote written in Greek letters which reads, "I can live neither with you, nor without you."[2] 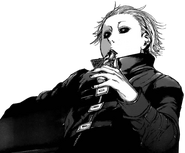 He has a very nice way of speaking and seems to be friendly. Although his expression almost never changes, he has an amusing way of teasing people.

Uta was sadistic and savage from his youth, and though the narrative would have the reader believe he left those ways behind, it was not true. Once his affiliation with the clowns becomes apparent in the manga, it is revealed that he hasn't changed at all - only gotten better at hiding it. Like all members of his organization, he may revel in creating chaos and destruction. However, his personal motives are still unclear.

Ken Kaneki and Touka Kirishima went to his shop, the HySy ArtMask Studio, to get a mask for Kaneki. While taking Kaneki's measurements, he talked with Kaneki about Touka and the risk factor of the varying wards ghouls inhabit.[3]

By chance, Uta brought Kaneki's newly-made mask to Anteiku just when Touka and Kaneki had stopped training. He made Kaneki wear his new mask. He remarked that he placed the eyepatch on the right side because he wanted to see Kaneki's left eye.[4]

He is only seen here when Kaneki is taken to Helter Skelter, the bar the Itori owns. The two of them shock Kaneki when Itori wears one of Uta's masks to scare him. They are then shown having a pleasant conversation together at the bar, discussing his and Renji's past and how the 4th Ward is now dangerous because of them.

Uta is a part of the team that goes to save Kaneki when he is kidnapped by the Aogiri. He accompanies Yomo, Touka, Nishiki and Tsukiyama in the endeavor. Sometime later, Tsukiyama remarks that Uta, though having his kakugan active, isn't actually using his full power. Uta answers by telling him he doesn't think he needs to be serious right now, and that he is only here for Kaneki and so he doesn't get lazy.

Despite not being at full power, he is able to keep up with Renji and Tsukiyama. When they finally find Kaneki, Uta along with Renji tries to comfort him after what he has been through.

Uta gives Kaneki information about the CCG's Reaper, mentioning how strong and invincible he is. He also tells him bits about his relationship with Renji and Itori. Uta is later revealed to be a member of the Clowns and he was seen celebrating along with the other clown members.[5]

At the Auction, Uta makes a grand entrance and serves as the Auctioneer of the event. He oversees the sales of a famous actor, as well as several insignificant "items". When Tooru Mutsuki is brought onto stage, he declares that the asking price would normally be 1 million.....but quickly notes the unusual scent of this particular item. Yanking off Mutsuki's eyepatch, he announces that the item for sale is a rare One-Eyed Ghoul and starts the bidding at 10 million.

The crowd is whipped into a frenzy, and a bidding war begins over this rare prize. As the bidding continues, Uta whispers to Mutsuki that the operation has failed and no one will be coming to save him. Having shaken the young Investigator, Uta oversees the final winning bid of 200 million. Taking advantage of the crowd's excitement, he declares the next special item for sale -- a beautiful, doll-like young woman. However, the woman interrupts him and reveals herself to actually be Juuzou Suzuya in disguise. He stabs Uta repeatedly in the face, before turning his attention to the audience.

As the raid on the Auction begins, Mutsuki recalls Uta's words to him and realizes this meant the Auctioneer knew Investigators had infiltrated the Auction. Later, he appears before Hirako and Shimoguchi squad, as Roma hides behind him, he greets Hirako.

As the fight starts, Uta continuously dodges Hirako's attacks and sarcastically remarks that Hirako has improved with his increased variety of attack patterns and must have gone up a few ranks. After the other clowns join in, he warns Roma to not take Hirako lightly, before other investigators begin engaging as well. Uta then donned a mask of Arima's face, telling Hirako to stand down; however, Hirako lost his composure and immediately slashed Uta across the face, during which Uta managed to stick Juuzou's knives, which were originally stabbed into his face, into Hirako's left arm, telling Hirako to return them for him.

First meeting each other when Uta was still the boss of the 4th ward, Uta fought Yomo several times on equal grounds, never finishing it as they knew they would both die were they to go all out. Finding it rare how someone as strong as him is around, Uta proposed to become Yomo's friend.

Uta and Itori both belong to the clowns, and is apparently friends from way back. They have a casual and relaxed relationship.

Uta found Kaneki to be interesting as he is the first one-eyed ghoul he has met.

Uta is an excellent mask designer creating many of the ghoul masks seen in the 20th ward. Like other ghouls, he possesses greater strength, speed and reflexes than that of a human. His body is also able to regenerate, and isn't affected by normal human weapons. In his teenage years, he was quite capable of defeating multiple ghouls at once. His strength led him to become the "peacemaker" of the 4th ward. His interactions with Kaneki and various other characters indicate that he is quite skilled at deception and manipulation.

Uta has shown impressive regeneration feats, second to only Noro's. Without any consumption, he has healed his face after being stabbed by several quinque knives in a short interval in addition to his instant regeneration when his face was injured again by Hirako slashing it in half horizontally.