He was a freshman (sophomore as of chapters 80s) studying at the Department of International Studies of Kamii University.

Also, He was working part-time at the CCG starting from a certain point, and soon became an investigation assistant helping both Koutarou Amon and Akira Mado.

He disappeared during the Owl Suppression Operation, and his whereabouts are currently unknown.

Hideyoshi is a man of average height that has short, messy, dirty blonde hair and brown eyes. He tends to wear bright colored clothes that consist of a yellow varsity jacket and green shorts. Because of his love for music, he is usually seen wearing a pair of headphones around his neck.

After the Aogiri arc, he lets his hair grow out, and most of the time he is seen wearing a red and white cap, and he no longer wears headphones. He's mostly seen in a light-blue jacket over a white dress-shirt with red collars. He also carries around a green bag, black pants and green shoes, aligned with yellow. 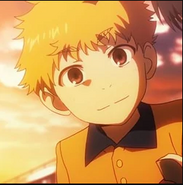 Hide as a child.

Most of the time, Hide has a carefree attitude, always joyful and friendly, which greatly annoyed Nishio. However, Hide is actually incredibly observant and can figure things out about people in an almost Sherlock-like manner. He also becomes interested in things and works hard on them until he finds something else to interest him. Hide claims to have a habit of pretending to be a detective by putting tracking devices on suspicious people and notifying the authority if his intuitions turn out to be right (however, the "hobby" part of it is most likely a lie he made up to hide his true motive from the CCG, which is to find clues about Kaneki's whereabouts).

Hide also has a very "determined" behavior. When he's set goals or decisions, he'll stick to them to the very end.

He is shown to have a good connection with Kaneki, encouraging Kaneki about many things and worries when he doesn't return his calls. Hide is also shown to be the opposite of Kaneki in some cases; as he is the type for festivals while Kaneki doesn't favour it.

Hide appeared first with Kaneki at Anteiku in the 20th Ward listening to news about ghouls. He asked Kaneki about the girl he had been talking about and pointed if the waitress, Touka, is the one but Kaneki denied it. Then Rize Kamishiro, the one Ken got a liking to, entered the cafe. Hide left the cafe after seeing the girl he had come to see and went to work.

After Kaneki's incident with Rize, Hide invited his friend Kaneki to Big Girl Restaurant for dinner. There, Hide commented how nice Ohashi is. Hide soon talked about Prof. Akihiro Kanou's decision to save Kaneki with Rize's organs but then apologized thinking how it was tough for Kaneki to lose the girl he started going out with. While eating, Hide got surprised at his friend's vomiting the food.

After Kaneki had disappeared for a long time, Kaneki finally went back to Kamii University. Hide yelled at Kaneki for how long he had disappeared. Then, events made them end up visiting Nishiki Nishio in the university to get the DVD of last-year's college festival, they disturbed Nishiki and Kimi Nishino when they were making out. Kaneki discovered that Nishiki was the ghoul that attacked him shortly before. Nishiki told them to help him look for the material, but then claimed that he took the disk home. He proposed that they should go to his home. In reality, he deceived Kaneki and Hide, took Hide out and started fighting Kaneki. He provoked Kaneki by standing on Hide's face with his foot, but Kaneki was no match for Nishiki with kagune. However, when Nishiki tried to kill Hide, Kaneki made his kagune come out. With his kagune, Kaneki heavily injured Nishiki. After that, Kaneki started to lose control over himself and was about to eat his own best friend Hide, but Touka appeared and decided to help him.

Later, Kaneki found himself inside Anteiku, where Yoshimura lead him to his friend that was lying there, seemingly unconscious. Kaneki noticed blood inside his mouth and realized that he ate human meat, so he went and asked Yoshimura about what he has done and the manager replied that there is only one way to calm a hungry ghoul. Kaneki said he wanted to be with his friend but he couldn't. Kaneki cried out that he was neither a human nor a ghoul and there was no place for him, however Yoshimura replied that he was wrong and there are two worlds he belongs to. Yoshimura asked him to join working in Anteiku while he would teach him how to live as a ghoul. It was implied that Hide was conscious and listening to Kaneki's discussion with Yoshimura.

Hide paid him a visit when he found out that Kaneki started working part-time in Anteiku. Hide spoke out that he also came to thank Touka for nursing Kaneki and him after a car accident, a story told to him by Anteiku's manager to cover up Kaneki and Nishio's fight. After they had left Hide, Touka told Kaneki to make sure that Hide won't find out about him being a ghoul because she would kill him if that were to happen, so that the ghouls' identities wouldn't be found out.[1]

Later, Kaneki and Hide were seen sitting together at the university. Kimi approached them to give Hide the materials of the previous year's festival. Hide asked Kimi where Nishiki was hospitalized, but she didn't answer. Then, Hide made a remark about Kaneki's scary face, who was wondering whether Kimi was a ghoul or not.[2]

After Mado's death, Kaneki went to his university. In a class, Hide started talking about the news of the death of two ghoul investigators. Kaneki asked Hide why he was interested in such things, then Hide showed Kaneki Ogura's newest book and said it was "super interesting". Hide talked about joining the investigation, but Kaneki told him not to do so because it was dangerous. After that, Hide is shown drinking a can of coffee and commenting on its bitterness.[3]

Shortly after Kaneki was kidnapped, he sent many e-mails to him in worry while watching news about changing statuses in Tokyo and the 11th Ward.

Hide appeared once again watching news about the 11th Ward Special Countermeasures Unit attacking the Aogiri hideout while he was taking some notes.

After the invasion on Aogiri Tree, it was revealed that Hide was the one who notified the CCG 6 months prior to the event by coincidentally tracking Yamori while performing his detective hobby. After applying as an office assistant at CCG, Marude questions him about whether he was the one to notify them of Aogiri Tree's base location and how he knew about it. Finding him promising, Marude then orders Amon and Mado's daughter, Akira, to take him away as a new investigator assistant. It's revealed that he joined the CCG in order to find clues about Kaneki's whereabouts.

After Kaneki's victory over Amon and his new quinque, Kaneki escapes to the sewers in order to get to Yoshimura. It was during this time when Hide appeared and revealed that he knew about Kaneki being a ghoul. Despite that, he still wishes to help him and asks him whether he can go all out once more to escape the CCG raid. Kaneki blacks out, and when he awakens, Hide is gone and the taste of blood is in his mouth. It is unknown whether an out-of-control Kaneki ate him or not.

Hide appears during the Aogiri Raid, looking for Kaneki with a pair of binoculars, and finds him battling against Ayato to protect Touka and the others. Later, he is shown working as a part-timer at CCG, trying to extract information about Kaneki's whereabouts, mostly from Takizawa and the other Investigators.

By chance, Hide encountered Touka while she was touring Kamii University. The two sat down and chatted about Kaneki, with Hide reminiscing and explaining to Touka about what sort of person he was in the past, and shows that he is worried about his friend. Touka tries to cheer him up, saying that he is probably reading a book somewhere. Hide smiles, and agrees with her. When he leaves, he tells her about Kaneki's habit of touching his chin whenever he lies.

Back at his house, he is seen holding up the missing persons poster showing Kaneki, commenting that Kaneki shouldn't make a girl like Touka worry about him so much. He is also later shown back at CCG, still collecting information about the Eyepatch Ghoul (Kaneki). It isn't until during the Anteiku Raid that he is shown again, this time dressed as a CCG soldier.

He spends most of the battle sneaking around, overhearing conversations between soldiers and worrying about Kaneki. When Aogiri joins the battle, he is caught in the ambush and witnesses Noro attack Takizawa. The Ghoul catches sight of him, though he seemingly escapes from the battle. Later on, he finds a wounded Kaneki outside of Anteiku and brings him inside the cafe. He attempts to make coffee for them both, and greets his old friend as though nothing had happened.

Apologizing for the poor taste of the coffee, he talks about the past and reveals that he was awake during the battle between Kaneki and Nishiki. He reassures him that this doesn't matter, and the two begin to relax. It is then that Hide collapses on the ground, revealing a stomach wound from earlier which he attempts to joke about. Bleeding out, he clings to Kaneki and requests that they go home. Anteiku begins to burn around them, and after a brief time Kaneki carries his lifeless body back to where CCG has established a base camp. The troops look on in shock, and Kaneki lies Hide down in the snow before going to face Kishou Arima.

They are best friends, but it's revealed that Hide has romantic feelings for him, but the fact of being or not corresponded never mattered to him.

He seems have Student-teacher relationship with Nishio.

It is visibly shown that Hide admires and is attracted to Touka.

Hide worked under Amon and Akira when he joined the CCG.

Hide worked under Amon and Akira when he joined the CCG. Akira seemed to have been suspicious of Hide, as she noted that he was strangely perceptive when asked about the mother & daughter ghouls' relationship to the Rabbit ghoul.

Hide was on a friendly relationship with Seidou, occasionally eating lunch together in the CCG building.

Hide was assigned as inspector assistant under Amon and Akira by Marude, who found out about him being the informant for the Aogiri Tree base location. He jokes around Marude sometimes, such as when he mentioned that committing suicide is bad when given an empty will before the Anteiku raid.

Hide has proved to be very perceptive for a human, being both able to distinguish Kaneki's changing feelings, and sense Nishio as dangerous despite not knowing Nishio was (in fact) a ghoul pretending to be human.